On Wednesday 14th October 4 LAA members performed forestry work in the valley felling sick and fratricidal trees in an area of over-crowded self sown Sycamore. This is part of a 10 year Woodland Management Plan.

On Sunday 18th October 6 volunteers worked in the valley clearing the brash and stacking the logs from Wednesday. At the same time our 2 chain saw operators made up a second group. They took down a tree that had partially fallen in Roy's Shaw as it was dangerous. They then cleared the large willow that had fallen across the public footpath at the bottom of Hopkiln Meadow.

On 20th September a "Covid regulations" reduced LAA work party of 8 people, carefully separated into 2 distinct groups, worked in the valley. One group of 4 did fence repairs to the fence around Wigals. Wigals is the woodland planted by children from Loose School. The trees along Linton Road from the top of Old Loose Hill towards Herts Crescent were similarly planted by the children from Loose School a generation before. It is so good to have a school involved in enhancing their environment.

The other group of 4 cut down the scrub trees near to Little Ivy. This will prepare the way for planting a healthier and more varied range of native trees in Roy's Meadow. Opening up will also encourage wild flowers and shrubs. 2 of the 4 in this group had to act as look-outs for safety reasons and while doing so were able to tidy up the path edges. It is now the time of year when annual tree work can commence. The aim is to thin the trees from excessive competition and we should see an improvement in the health of some of the trees that are currently being smothered by the over-growth of Sycamore, e.g Wild Cherry and Oaks. Unfortunately Ash Die-back has arrived in the valley. This has necessitated some large trees near the footpaths being felled for safety reasons. This was unplanned and is much regretted but was strongly advised by an arboriculturist and a tree surgeon. Many thanks once again to our volunteers

On 16th August 9 volunteers worked on LAA land in the Loose valley. We are currently restricting numbers of volunteers so that we can more easily observe distancing as required by Covid regulations. Normal will happen one day! Sadly some of us had to repair vandalised gates. We think they were broken deliberately probably by cyclists trying to get their bikes through despite cycling not being permitted in the valley. On one of the gates the top bar had actually been broken and the closer post moved out of alignment. One of our volunteers who is trained to use a chain saw felled several poor and overcrowded bullace trees some of which were unstable and hanging over the vehicle track. Some of the wood produced was/will be used to make path edgings. The smaller branches and twigs will be used to make dry hedging on the woodland edges. This provides a habitat for small mammals, reptiles and insects as well as woodland edge plants. Areas of invading nettles were cut near Little Ivy to give other plants a chance to grow. The clippings were used as a natural mulch under the trees. At the start of the work party several "tonne" bags of fir tree remains left on Brooks Field from the Christmas tree were taken from Brooks Field as they had never been collected and used to make a mulch-type habitat under the hawthorns in Rainbow Meadow

On Sunday 19th July a small group of volunteers worked in the valley for LAA. Due to Corona virus we are keeping our group small and doing our social distancing bit. The time was spent path clearing in the main. We cleared the circular route round the village end of Rainbow Meadow and the public footpath that runs through Roy's Meadow beside Little Ivy and Woodlawn. Some of the big Sycamores along the public footpath by the Woodlawn border had an overgrowth of ivy. We like to see some ivy on the trees as it is excellent for wildlife but if you get too much in the crown it makes the tree very vulnerable to being blown down in winter winds. For this reason the ivy is being cut so that it will die back. As a small aside the wild flower meadow (Rainbow Meadow) is looking pretty good at the moment. There are lots of butterflies, bees, crickets and grasshoppers etc. among the flowers and grasses and lots of Soldier beetles on the Hogweed flowers.

Ivy cut at base of Sycamore along Woodlawn path

On Wednesday 11th March LAA were grateful to receive the help with our work in the valley of a group of people from Cabot at Kingshill. A group worked in the woodland stacking cut wood and putting brash into dry hedges at the edge of the woodland. Another group cleared the mud from parts of the public footpath and made good with ragstone chippings. The final group worked on the ground near to Brickfield Cottage digging out brambles. So a big thank you to Cabot and their team who worked very hard. We hope we will see them again.

On Sunday 15th March 12 volunteers came to the Loose valley to join the LAA work party. We concentrated mainly on Rainbow Meadow. Grass and brambles were cut and raked up. The cut vegetation was put in various places to provide habitats for smaller species such as rodents, reptiles and insects. We also cleared the ground to allow sheep access to coarse grasses giving the wild flowers a better chance. Invading Bullace scrub was cut and the brash from that was used to build up the dry hedge that borders the woodland. We also continued repairs to the public footpath. We were delighted to welcome Lola (and her family) who did a much appreciated litter pick as part of her D of E award.

On Friday 17th January 4 of us went down to Loose Valley to work. Our 2 chain saw qualified volunteers felled some damaged and dying trees. This will make room for more healthy trees to grow. We also cut down some of the invading Bullace scrub to open up glades and remove it from some of the grassland areas. Some were also crowding out the low, dense canopy Hawthorn wood that is so valuable for birds. In the winter this is used as a roost by Fieldfares and Redwings en masse, on occasions. The resultant cut wood is being stacked for use and the brash/brushwood has been used to renew the dry hedge at the edge of the wood.

This work is the first stage of the Woodland Management plan.

On Sunday 19th 13 volunteers worked in the valley on a variety of tasks. A tree that had fallen into and across the stream was removed, a cold, miserable job, even in waders! A patch of the more vigorous bramble that had invaded the flower meadow was dug out and other bramble areas were cut down. Meanwhile other volunteers cut up and stacked the rest of the wood from Friday's efforts and built the brash into the dry hedge that borders the woodland. The dry hedge provides a habitat for small mammals etc. and also protects emerging woodland edge plants. Ironically this includes bramble, what a pity we can't teach it to grow only where it is wanted! As always thanks to our volunteers and our refreshment providers. 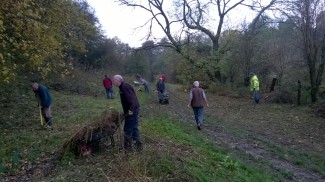 13 volunteers worked in the valley today, Sunday 17th November. The slope below the woodland near Little Ivy was mowed and raked to clear for the wild flowers in the spring. Some of the overhanging and invading bullace scrub was cut back to let more light in. The cut branches are woven in to make a dry hedge along the wood and the path thus improving those areas for wild life e.g wood mice and bank voles. A little further along the invading nettles were cut and cleared and just beyond Little Ivy an area of invading of bramble and nettle was also cleared. The volunteers worked really hard and every-body was very tired. They all richly deserve our thanks 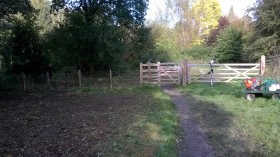 8 hardy souls worked in the valley on 20th October. The weather was kind with a clear blue sky. We cleared nettles in an area around the gates between Rainbow and Roys Meadow and adjacent to the stream. Working north along the valley, the area at Little Ivy was also cleared of nettles and brambles. All cleared material was heaped at several positions, these should provide a short term habitat for wildlife.  Nettles whilst not a bad plant to have do sometimes overpower an area. By regular cutting and consumption by sheep, we aim to manage the nettles along the valley.

The litter 'hidden' in the undergrowth was also removed. 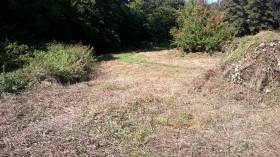 13 people turned up for LAA's monthly work party on Sunday 15th September. We cleared the bank side and an area near the stream in Rainbow Meadow. It is planned to keep that particular area relatively short and clear to provide a more people and dog-friendly place thus taking the pressure off the rest of the stream bank. It may have the added benefit of allowing more "short grass" wild flowers and plants to grow. The cuttings have been stacked and when wilted will be used as a high-nitrogen mulch for some of the trees and the thicket and woodland areas. We also cut the verges in Kirkdale and cut back the vegetation alongside the vehicle track and the Ride footpath. Thanks to all the volunteers and the refreshment providers. Warm work on a warm morning!

P.S. We had the added pleasure of seeing 5 Buzzards circling over the valley and having mini "dog fights